Yes, I do have at last a FO that is not a pair of socks,
it seems like this shawl has been on the needles for the longest time.
I was thoroughly sick of it by the end.
I love the pattern and the yarn but none of the needles I had were working with the mohair and the slipperiness on my addi, drove me insane!
I did need the needle for something else so, it had to be finished. 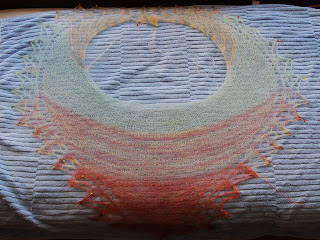 It has been added to the xmas present pile. (which is still very small!)

The other day a package arrived from Maylin and it contained this loveliness. 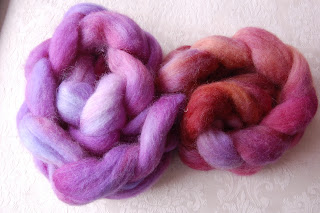 The colours of the one on the right are sooooo pretty when spun, so it became this, 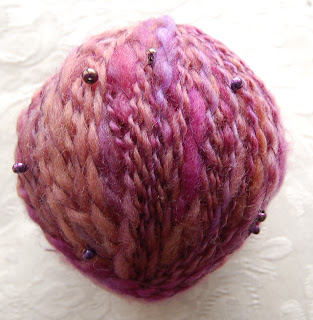 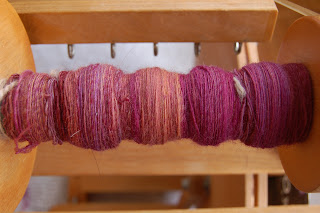 I love it, thank you Maylin.
You can see more of Maylins stuff here

The thick and thin I want to knit ysoldas urchin beret with but not sure if it is thick enough, it really wanted to be thin yarn, so the other half became thin singles that I don’t know what I am doing with yet. Something pretty.
This afternoons choice of activity is ironing or some spinning of purple roving, choices, choices!!

This part is really not knitting related so you can skip it if you want.
All weekend there has been a discussion going on in Ravelry which did start out as a discuss the hooha caused by Jane’s lovely book and the term pinny porn which was used to describe it.
Having listened to the interview on Womens Hour, I was interested to see what everyone else thought.
Well, this discussion went way, way off topic, starting with someone saying that boys knitting made her cringe!
Also that as women our jobs were to look after the men and boys shouldn’t be encouraged to do girly things!!!
As at the time of reading the comments were already in the 200+, I didn’t get involved, but at dinner the boys were asking what I had been reading, it did take me a while to read it all.
So I explained what it was, this was of course while eating dinner, which for the most part my husband had cooked, while no2 son made muffins.
Anyway after explaining everything no 3 teenage son said, “So, does she just think that women should be slaves then?”
No2 said “Why as an adult would I expect anyone else to do things for me, that I am perfectly capable of doing myself!”
So I am very proud of my boys who knit, sew, do laundry, etc etc, I have to say the rest of the dinner conversation included football, rugby, cars, a physics test, and the Nobel prize winners, just in case you were worried we only talked knitting chez moi!!