Posted on March 24, 2007 by YC
My Dh’s work in their wisdom are trying out a new shift system, which means that the team, there are 6 or 8 of them I think, work a month of each shift. Jim is the only married guy with kids on the team, the two female engineers on the team were allowed to opt out as organising childcare was too difficult. So for the past 4 weeks he has been working from 12noon till 10pm. So for the past month I have been the only parent around in the morning and evening during the week…I am so tired, maybe its just their age but do they have to argue about everything, I need a whistle and a red card or a cattle prod! Is it wrong to want to run away from home when you are the parent? 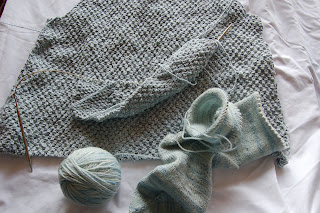 On the knitting front the back and a bit of one front of Wispy are done, one blue sock needs the toe ripped back and re-done and the second is on the needle. I love this yarn from here (thank you Heather) and some more arrived in the post this week. 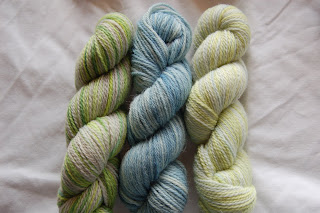 I still have not managed to get a new set of dpns in 2.5mm which sucks as the ones I have, 2 are not usable as they are splitting, this I found out after having to go to A+E with one of the boys and a suspected broken finger. I arrived with yarn and the needles I had were a pain so 2 hours of hanging around, wasted knitting time! 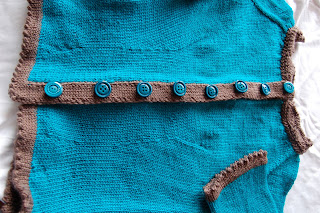 Matilda Jane is done except I bought the wrong amount of buttons and the ribbon I bought is too wide and I don’t like it, so more shopping tomorrow and hopefully some sunshine so I can take some decent pictures.

Bloom is done except the sewing up so maybe later today if I can find a calm hour or so.

The spring clothes for my niece are coming along in the planning, I just need to find time to cut patterns and fabric, I need up to date measurements too, must ask for those.

So Jim has left for Japan and my programme for this week is to stay as sane as possible, wish me luck!