This is one project we have been working on this holiday 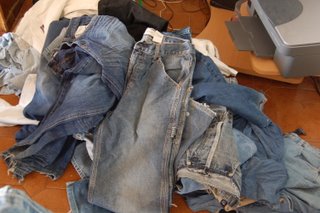 We started off with this, 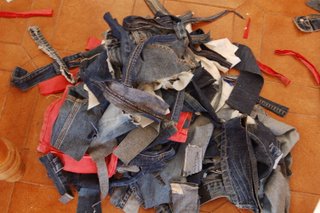 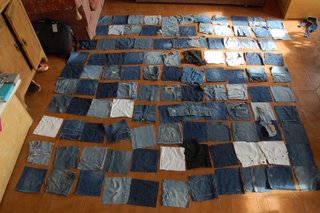 Now just all the sewing to do.

Jamie has been collecting old jeans for the last 5 years to make a patchwork with.

I have to say for the past 2 years he has not been the easiest person to live with, teenage angst hit hard.
Needless to say every time I suggested we work on his project it was met with a firm NO.
I still kept every old, holey pair of the jeans in the hope that one day he would decide it was time and it was still something he wanted to do. And he did! (we do have enough jeans left over for at least one more quilt!)
We had such a laugh remembering who had worn which jeans and I laughed at him because he insisted on keeping the pieces with “nice” holes, I am sorry honey but a holey pair of jeans is just that!
He also took the longest time re-arranging the squares, I had to try really hard not to say anything, especially when Jim said in passing “he is so your son!”
I have no idea what you are talking about!

Jamie started a new school in September after fighting the system (and us) for almost 2 years. We got to the end of half-term with only one minor bunking off on the last day, this is a major achievement and I am very proud of him.

He is studying Mens Tailoring at school and apparently its fun, yeah!
We spent a long time coming up with other study options for him and to be perfectly honest, I thought he chose this to keep me happy, I had highlighted it as an option as a joke, cause I would have loved to do this course. (I did also suggest a Chocolatiér, sp?)

At home in the last 8 weeks he is a different child, he gets up for school with no arguing, he chats about his day, he asks me sewing terms in english, he talks about project work, he reads my Vogue magazine, he is not fighting with his brother so I am kinda hoping the teenage thing is over. Maybe I will be better at the parenting thing with the other two! Or with any luck they won’t feel the need to rebel quite so much!